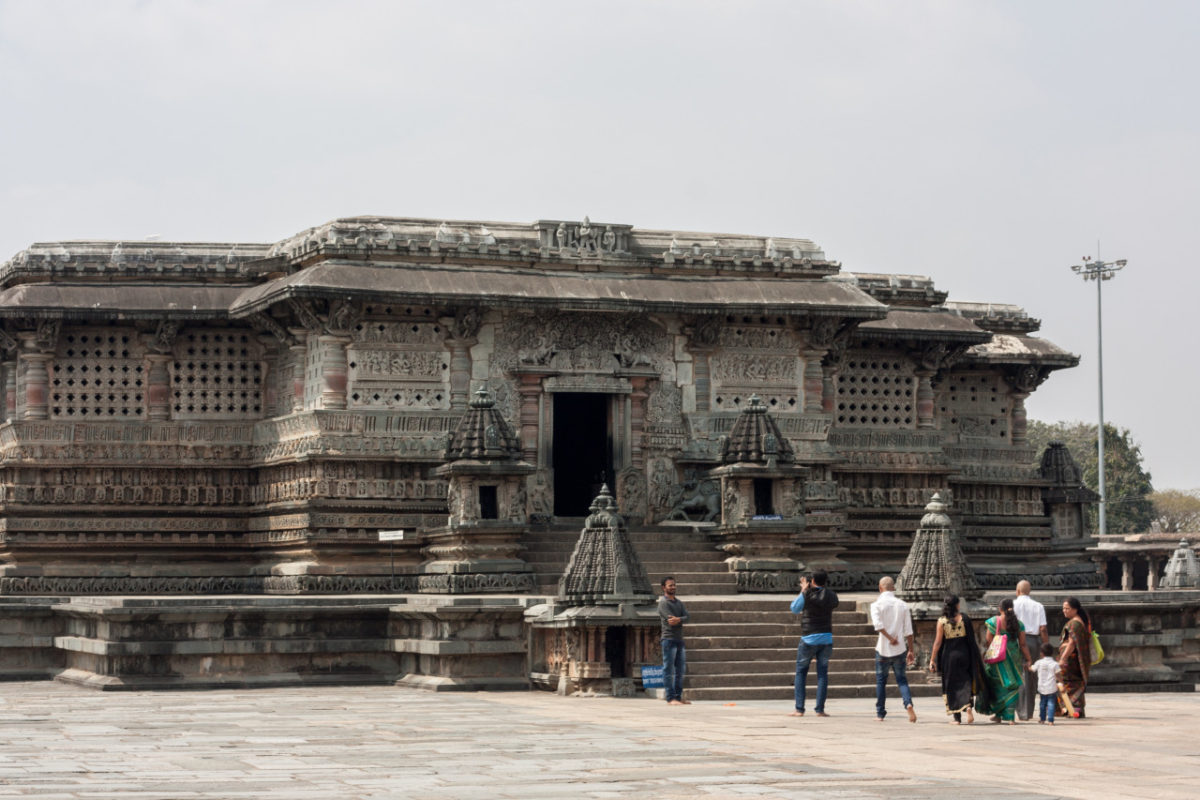 At the entrance to the masterfully crafted Chennakesava Temple in Belur is a soapstone sculpture of a young man fighting a fearsome lion. It is the emblem of the Hoysala dynasty that ruled much of modern-day Karnataka between the 11th and 14th centuries.

“A lion once entered a gurukul,” Udayakumar, my guide, said. “Fearing for their lives, all the students ran away. But one boy, Sala was his name, stayed behind to protect his teacher.

Hoy means to strike. The boy struck and killed the lion.”

According to legend, it was this boy who later founded the Hoysala dynasty. My guide and I were standing in front of one of the foremost markers of this dynasty’s legacy.

“Sala’s successors built this temple during the 11th and 12th centuries,” Udayakumar said. “This was not built in a day. No, it took lakhs of people and 103 years to build it.”

A century of building seemed about right looking at the incredible attention to detail on the outer walls of the temple. Take the wall relief of a monkey pulling on a woman’s sari where even the monkey’s tiny teeth have been individually sculpted. It was clear that the walls were not reserved just for stories of Hindu gods and goddesses. They documented the society of the time as well. There were numerous images of women in a variety of clothing and hairstyles participating in scenes from daily life: hunting birds, beating a drum, singing, and playing Holi.

An image of a young man with his arm around a donkey-headed woman did seem absurd, but Udayakumar’s explanation was matter-of-fact: “This is to show that love is blind.” It was an example of the philosophies and morals that Udayakumar believed the temple builders wanted to communicate. He felt that the Chennakesava Temple was not just a place of worship; it was a place of education too.

The Hoysalas were serious temple builders and they developed a distinctive architectural style. Star-shaped platforms housed the temples, intricate artwork covered the walls, and magnificent circular and bell-shaped pillars supported the halls. The Chennakesava Temple fit this description too, and the forty-eight unique pillars in its mandapa (hall) were especially awe-inspiring.

“This looks like a bicycle tyre, that looks like a motorcycle tyre. See, that’s a bangle design, this is a necklace design…” Udayakumar said, as he walked the length of the mandapa. There was remarkable artistry on display. Many pillars had bulbous middles and smooth, polished rings carved in between the capital and the rectangular base.

No pillar was more impressive to my eyes than the Narasimha pillar, which was home to miniature versions of every single carving on the outer walls. In other words, it served as the index. The planning needed to ensure this symmetry was mind-boggling – remember, this temple took over a hundred years to build. Interestingly, the sculptors had left one spot on this pillar free of any carving. Acccording to Udayakumar, this was intentional.

“It is to show that there is no end to art.”