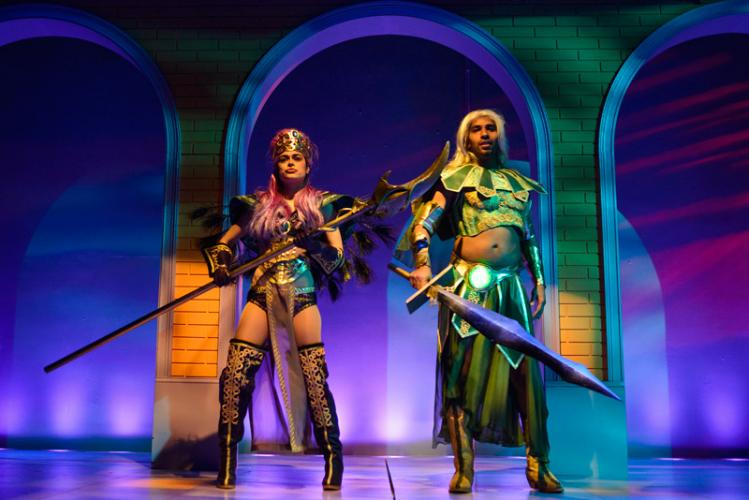 Evie Malone, a college senior and closet romantic, plays Warcraft with her online boyfriend and fixes other people’s relationships. Sure, she doesn’t have a sex life, but who really needs that… right?

Washington Post: “Theater is a confident art form in the hands of dramatist Madhuri Shekar. Her comedy “In Love and Warcraft” pokes fun at the video game industry, chronicling the travails of a college student who’s addicted to online fantasy role-play. […] As seen in a highly entertaining No Rules Theatre Company production, directed by Joshua Morgan, the play is a bona fide romantic comedy, succeeding so blithely in the format that launched innumerable Hugh Grant flicks that you almost can see Hollywood flailing in the rear-view mirror.” – Celia Wren

Broadway World (Washington, DC): “Like Evie, the emotional center of In Love and Warcraft who is surprised to discover she has a full heart, this new play by Madhuri Shekar at No Rules Theatre Company is full of heart, overflowing with warmth and good humor to balance the challenges of intimacy in a world that does not respond logically to strategy and commands. – Pamela Roberts

Atlanta Journal Constitution: “The winner of the 2014 Alliance/Kendeda National Graduate Playwriting Competition, [the play is] a canny blend of Jane Austen and Cyrano de Bergerac — as viewed through a geeky collegiate lens. Shekar stirs up great comedic shenanigans and one wholly original theatrical interlude. Over 10 years, the Alliance’s playwriting competition has identified the literary stars of the next generation. Shekar is no exception. In Love and Warcraft is a fresh look at the strange social behaviors spawned by Internet culture, where love and loneliness spar like the masters and the monsters of the universe.” – Wendell Brock

New City Stage: “It’s rare to see a “nerd” character in a play not being treated as a joke or a stereotype, and Evie truly feels like a fully realized human being. In fact, Madhuri Shekar’s script treats each of its characters, including Evie, her sex-addicted roommate Kitty (Claire Reinhart, who owns the stage every time she’s in a scene), and her love interests – Raul (Kroydell Galima) and Ryan (Brian Bradford) like real, fully formed people… some of whom just happen to spend time going on raids with their level thirty-four Night Elf Hunters. […] “In Love and Warcraft” is fun, funny and, by the end, deeply touching.” – Sean Kelley

DC Metro Theatre Arts: “In Love and Warcraft will be a treat for the curious theater-goer. […] a most tantalizing theater on the cutting-edge of the new. This is good news for DC area theater-goers who hunger for some atypical and distinctive new tastes.” – David Siegel

DC Theatre Scene: “[T]he first scene of No Rules Theatre Company’s DC premiere is a collision between romance and fantasy combat, heartfelt pleas and argot-filled cacophony, broad sex humor and genuinely human connection. It’s as all-encompassing an introduction to the play you’re about to see as you could ask for – if the title, In Love and Warcraft, wasn’t clear enough – and the more you enjoy its juxtapositions and energy the more you’ll love what follows.” – Brett Steven Abelman

Atlanta Cultural Arts Review: “The Alliance presents this incredible premiere of this work, which won the 2014 Kendeda National Graduate Playwriting Competition. […] The show progresses from real life to WOW in the second act, and when the Avatars show up it is some of best costuming and funniest acting you’ll ever see.”  – RJH

It’s election day and I woke up to vote when the polls opened at 6am, so I have a little time to post an update of my latest theatre news.

This past weekend (Nov 4-6), In Love and Warcraft opened in Tulsa, OK (Heller Theatre Company) and also had its professional London premiere! ILAW opened at Theatre N16 in London on Sunday, Nov 6, produced by What a Nice Production company. It also happened to have a closing at Anne Arundel Community College in Maryland.

With those productions, ILAW is now between 12-14 productions, depending on how you count them. This is truly stunning and so unexpected and amazing. I’m just thrilled that this play has had a life and I hope hope hope that it continues to do so.

(Also, if you want to buy it and read it, you can: http://bit.ly/InLoveandWarcraft)

And more news! A Bucket of Blessings, my first TVYA play, or play for babies, won a Suzi Bass Award last night. The Suzis are Atlanta’s theatre awards. I loved working on this play so much. Grateful to our director Rosemary Newcott and everyone at the Alliance Theatre for giving me yet another incredible opportunity to make something I can be proud of, with people I adore.

‘In Love and Wacraft’ at Texas Woman’s University, Feb. 24-28, 2016. Such a cute cast. And they cut together this lovely trailer as well.

In Love and Warcraft just had its FIRST international production in Edinburgh, Scotland! So exciting. Produced by Beam Theatre and directed by Andra Roston.

A couple of reviews:

In Review: In Love And Warcraft (DownTheTubes.net)

In Love and Warcraft (AllEdinburghTheatre.com)

Some press (before opening). (Edinburgh News)

So great. I love it.

A bit delayed, but I got to go up to San Francisco to see Custom Made Theatre’s Bay Area premiere of ‘In Love and Warcraft’ during Thanksgiving weekend. Here’s a little bit of me answering a question during the Q&A – “Are you a gamer?”

The production has been extended through Dec 17 so one weekend left! 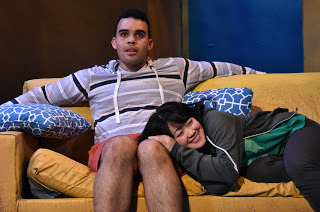 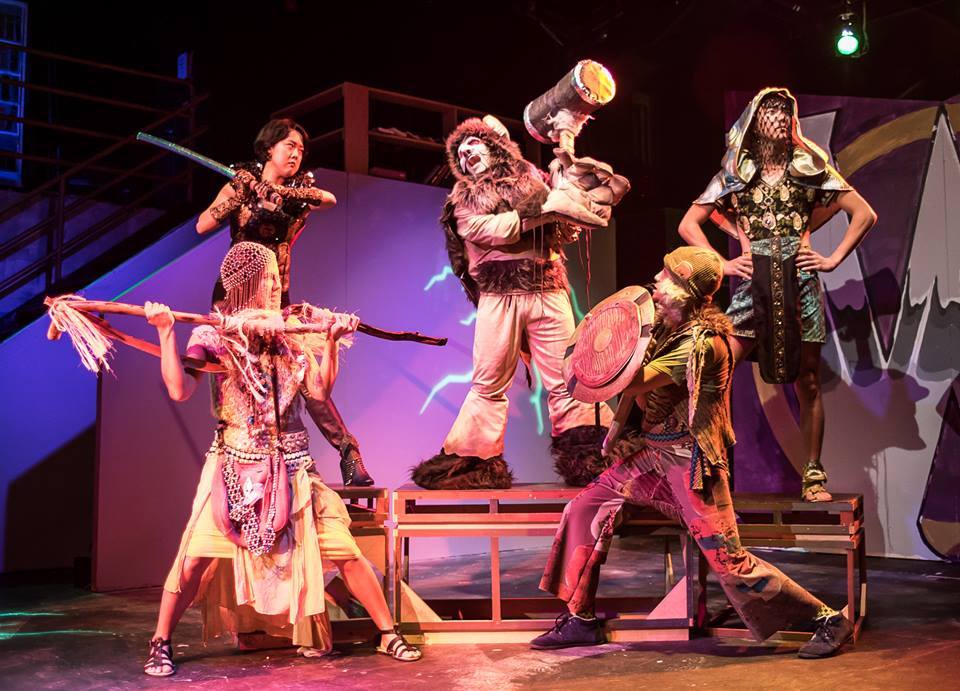 I’m so proud to have written this ridiculous show. IN LOVE AND WARCRAFT opens tonight in Los Angeles, its fourth production and West Coast premiere.

Trailer for the west coast premiere of ‘In Love and Warcraft’! I freaking love this!!!

Tickets on sale now at http://bit.ly/AAPWarcraft 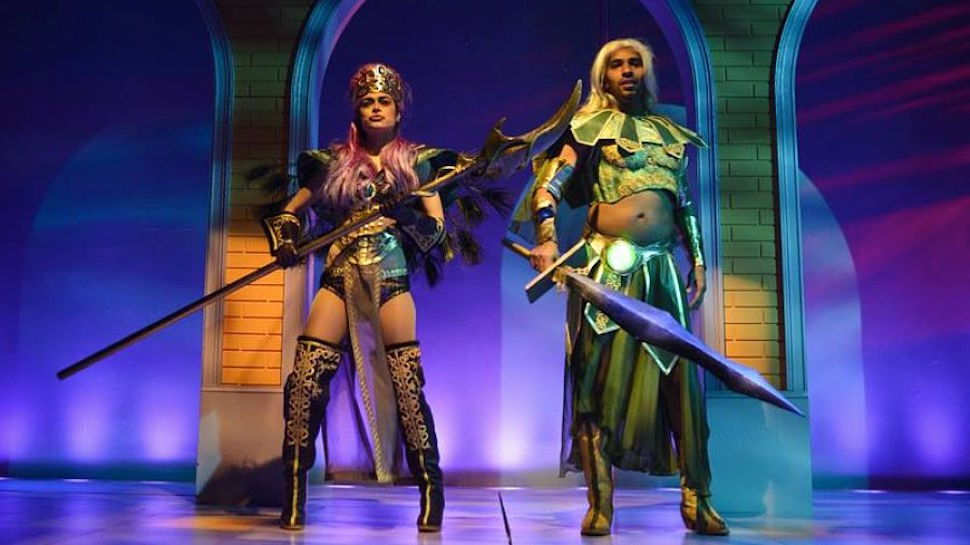 In Love and Warcraft: Interview with Playwright Madhuri Shekar

Isn’t it amazing how geek culture has infiltrated everything these days? Not just comics and gaming anymore, nerd culture has moved to TV, movies, and even plays to help color the world in which we live. Such is the case of the new play, In Love and Warcraft, a production that—you guessed i…

My wonderful friend Alicia Lutes interviewed me for geekandsundry! This is amazing!

‘In Love and Warcraft’: All’s fair and non-gamers welcome

3 stars from the Chicago Tribune!