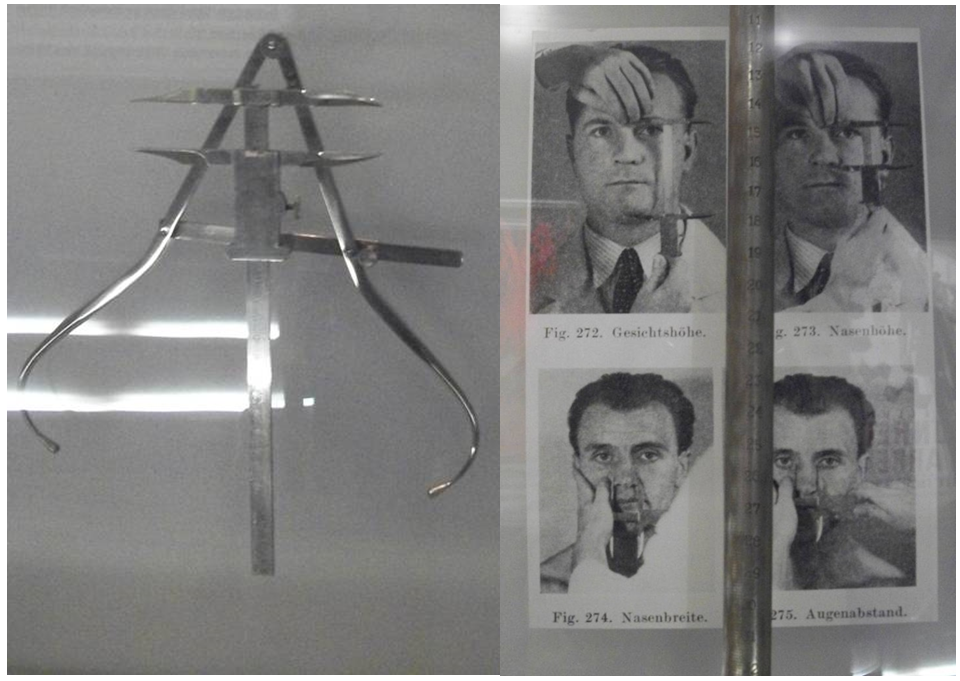 Nazi racialization of the Jews.

Adolf Hitler targeted the Jews in the Holocaust not simply out of hate, but for strategic reasons. Describing his plan to take over Germany, and then Europe, he wrote:

I scanned the revolutionary events of history and… [asked] myself: against which racial element in Germany can I unleash my propaganda of hate with the greatest prospects of success? …I came to the conclusion that a campaign against the Jews would be as popular as it would be successful.

Jews, Hitler figured, were already well hated and, thus, would lend themselves to demonization quite easily.

Once it was decided that the Jews would be targeted, wrote Ronald Berger writes in his essayThe “Banality of Evil” Reframed:

the most immediate difficulty that confronted the Nazis was the construction of a legal definition of the target population.

At first, the Nazis defined Jews as non-Aryan. But this became problematic because nations with whom Germany wanted to ally (e.g., Japan) were arguably non-Aryan.

So, the regime settled on a definition that linked non-Aryan-ness to religion. Both racial and religious characteristics could qualify one as “Jewish.”

Like the rules of hypodescent that separated black from white in the U.S. during and after slavery, the Nazis had rules as to what percentage of Jewish blood one needed to have to be truly Jewish. Berger explains that a Jew was defined as a person who was ¾ths Jewish or more. The term mischling worked like the U.S. word mulatto to identify a person with mixed blood (in this case, someone who was ½ Jewish and also was married to a Jew or practiced Judaism).

The next step was measurement. In confusing cases, how could the Nazi’s prove that someone was Jewish or mischling? They developed instruments. These photographs (mine) are from a museum in Munich that has collected some of the instruments used to place a person on the Aryan/non-Aryan spectrum.

This is just one more example of the way in which racial categories are constantly being invented and reinvented, usually for reasons related to power.

Also why Key and Peele’s ‘Das Negros’ sketch is so effing brilliant. https://youtu.be/m1bLXk6UVts

Okay so. Buckle up, kids. It’s time for Furiosa feels.

I am what’s called a fetal amputee. Fancy way for saying I was born with a missing limb. I’ve written about this on here before, but it’s been a long time and I’ve gained a lot of new followers recently (hai guyz) so it might be news to some of you.

This is Charlize Theron as Furiosa.

I finally wound up going to see this movie Monday night after work, by myself, cause I was too thirsty for it and couldn’t wait for my friends to be available. Everyone was out of town this weekend for various reasons, so I figured I’d just wait for someone to go with, but then Facebook started talking about how amazing it was and I just couldn’t put it off any longer. So that’s how I ended up in a theater last night, completely by myself – not another soul in the room, sobbing my eyes out.

Because you guys. I am turning 30 years old next week. I’ve been a fan of action film my entire life. And I have NEVER seen a physically disabled, kickass, female lead character in a Hollywood movie EVER – not once, until yesterday.

We finished our Kickstarter this morning for ‘Titus and Dronicus’ and couldn’t be more thrilled with the outpouring of support. Thanks to all the lovely Tumblr folks who reblogged our trailer and helped spread the word <3

If you’re in the mood for some hardcore Shakespearean geekery today, check out this fantastic new podcast from Cindy Marie Jenkins, LA theatre and Hollywood Fringe treasure. Me and Megan (two of the co-creators of Titus and Dronicus, part of @betterthanshakespeare) talk Shakespeare adaptations with other awesome LA theatre people.

friend: so, what type of guys are you into?

“‘No-one has ever modernized the settings for Shakespeare, so that kind of innovation is really exciting and satisfying,’ Megan jokes in their Kickstarter announcement. ‘Shakespeare wasn’t really an innovator. We’ve cleaned up the plots and tightened them – they were kind of a mess. His characters are pretty shallow. And our language is really rich, there’s a real poetry to it.’”

Huge thanks to hyper-mediation for helping us spread the word!

(And yes for the record of course we’re joking about being Better Than Shakespeare (maybe… (I mean, in some ways…)))

Meet Titus and Dronicus. We want to make a web series out of these guys.

Our Kickstarter runs till May 19 and every contribution/share will help immensely. Please check this out for some geeky Shakespearean fun!